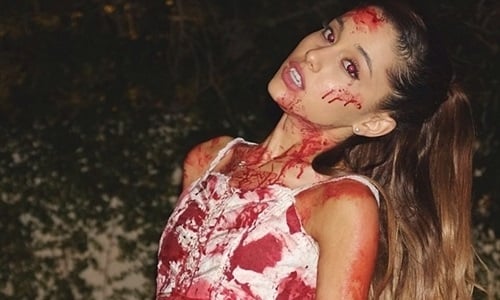 As you can see in the photos below, actresses Ariana Grande and Hayden Panettiere both dressed as dead sluts for Halloween.

Ariana Grande’s first costume choice appears to have been a cat in thigh high socks and a ridiculously short ballerina skirt. Thank Allah Ariana changed this costume and instead decided to be a dead slut. For what Muslim man has not fantasized about seeing Ariana’s body covered in blood?

Hayden Panettiere wore a more elaborate dead slut Halloween costume. She appears to be a busty decomposed tavern wench, who probably had a run-in with the mujahideen. Certainly this Hayden Panettiere costume is halal.