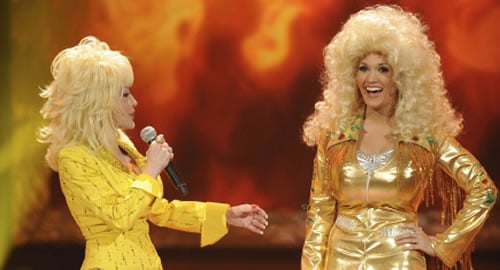 During a profanity-laced opening that had to be edited for west-coast viewers, Underwood said that “you can’t have Christmas without Christ,” and that anyone who disagreed could “take it up with the A.C.L. Jew,” a derogatory reference to the American Civil Liberties Union.

“Where I come from, we say ‘Merry Christmas,’ not f**king ‘Happy Holidays,’ said Underwood while taking a generous swig from a bottle of Early Times Whiskey. “They made me call it an ‘All-Star Special,’ but it’s more like an ‘All Star of David Special.’”

“Since when did we start calling Catholics ‘Christians?’ said Underwood. “I can put a saddle on a donkey, but that don’t make it a horse. And just because those Mary worshipers carry around a cross don’t make them Christians.”

Added Underwood, “As for Mormons, f**k them too.”