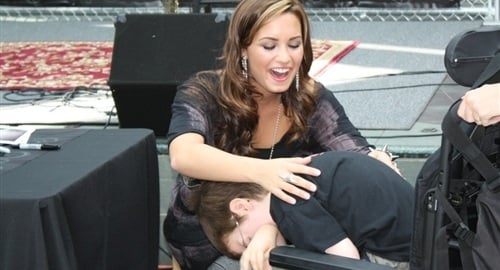 Demi Lovato’s ego is officially out of control. She was at a mall signing autographs in Detroit yesterday when she noticed a crippled boy on his way to get a refreshing Orange Julius.

According to one eye witness Demi shouted “Hey everyone watch this. Behold the power of Demi!” and she rushed over to the crippled boy and placed her hands on his back.

Demi then shouted “In the name of Demi Lovato I heal your broken spine.” She then commanded the boy to “get up and walk”. However, when the child was unable to rise up out of his chair she berated him for being lazy, and stormed off in a huff.

Imagine the hubris of Demi Lovato to think that she can heal the crippled with her touch when it is the will of Allah that these people not be able to walk. Frankly I find giving cripples wheelchairs offensive, because Allah clearly wants them to have to crawl around in the dirt for his amusement.

Wheelchairs are just another example of man’s arrogance, and Demi Lovato thinking she can cure the crippled is the epitome of that arrogance. May her blasphemy not go unpunished. Allahu Akbar!