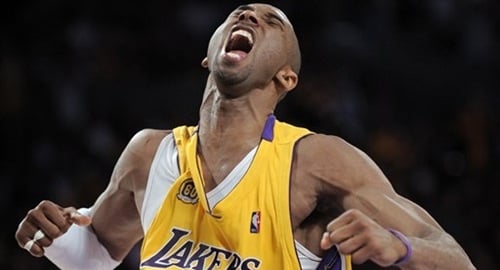 Kobe Bryant is being unfairly attacked by the Zionist media simply for remarking that an NBA official is a “f*cking f*ggot”.

First, how do we know that the NBA official is not a “f*cking f*ggot”? Has anyone even bothered proving that this man does not suck c*ck before lynching Kobe in the papers? Even if this referee is straight, I don’t see what the big deal is. It is not like Kobe accused the man of eating swine or even worse being a Jew.

Not only is Kobe Bryant being attacked by the mainstream media, but a gay group called “GLAAD” has issued a statement against Kobe with a hateful racial slur. GLAAD, or “Gays Licking Asshole And Dick”, is a militant homoqueer rights group that threatens all those who oppose the gay agenda. In a statement overheard in a men’s room a GLAAD representative said, “The NBA must now take action. No matter the intent, slurs like this fuel intolerance… Kobe is a n*gger.” Which was followed by some gargling sounds and moans.

No response yet from Kobe Bryant.