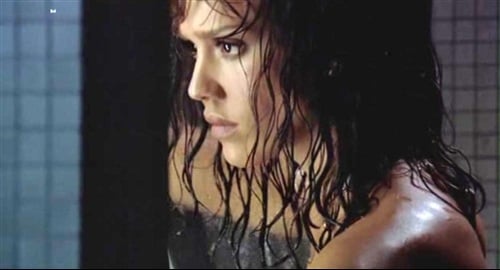 After years of anticipation Jessica Alba has finally done a nude scene in a movie. Below are pictures of Jessica Alba naked in some horrible Mexican B movie called “Machete”.

Jessica Alba has tortured her male fans (and let’s face it she only has male fans) for years with her terrible acting in even worse movies. Now after the majority of people have long since stopped caring about her, Jessica Alba has decided to show off her naked body.

Even after losing considerable hotness by having a kid, Jessica Alba still looks pretty good naked. Of course after making us wait years for these pictures the least she could have done was show some vag or bent over and spread her butt cheeks, but she is a stuck up b*tch so what are you going to do.

Here are the naked pictures of Jessica Alba from the movie “Machete”. Allah willing this is just the beginning of Jessica’s descent into doing smut films to feed her child.