John Travolta Is Living A Lie 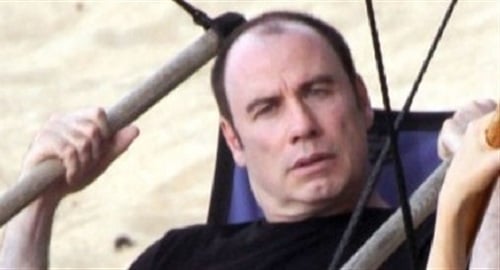 No, not THAT lie. Ok. He’s living two lies. But with this lie, we have proof, whereas, with the other lie, we have just short of whatever “proof” is. Strong suspicion, I guess.

John Travolta’s really bald. And not in a distinguished, mature man way, but in a funny, “he kind of looks like a hairless bear or something” kind of way. The look on his face says it all. It says “yeah, this is how I actually look. So the hair thing, combined with the I’m-probably-a-closet-homosexual thing makes me a shell of the man that America fell back in love with after Pulp Fiction.”

It’s clear that Travolta isn’t exactly riding high these days, which is why the balding thing is an opportunity. He can reinvent himself with some interesting headgear which will make him appear masculine and stop people from talking about the gay thing. Here is just a short list of things he could slap on that dome: