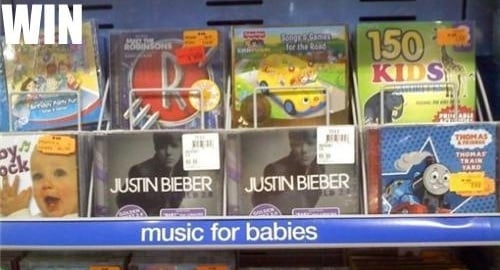 Justin Bieber’s music has long been criticized for being too “simplistic” and “just plain awful”. Music executives are starting to take notice as it appears they are now targeting Justin Bieber’s music towards those who can not voice their objections to it, namely babies.

Stores across the country are already starting to restock Justin Bieber’s CDs in their “Music For Babies” section. There are also rumors that Justin Bieber will be making a guest appearance on the hit Nick Jr show Moose and Zee to help promote his new album.

Frankly, I find it deplorable that Justin Bieber would try to peddle his horrible music to defenseless babies. As the most vulnerable members of society, babies should be protected from this type of audio abuse that is about to heaped on them by Justin Bieber and the Zionist controlled music industry.