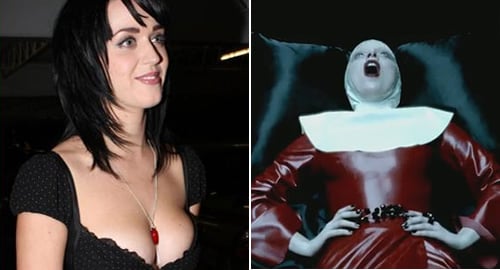 When Lady Gaga made her intentionally blasphemous video, “Alejandro,” I was sure Allah would want me to exact revenge. I stayed up all night with my saber by my side, hoping Allah would call on me to cut off her head. But the call never came, and the phone company says my phone is working properly, so I figured Allah must have it under control. Turns out I was right.

Allah, in his infinite wisdom, decided to pit whore against whore by using Katy Perry as his weapon against Lady Gaga. Perry recently posted the following remarks, directed at Gaga, on her Twitter account:

Using blasphemy as entertainment is as cheap as a comedian telling a fart joke.***

It’s good to see Katy Perry sticking up for a righteous cause by putting Lady Gaga in her place. Unfortunately, when the revolution comes, she will still be put to death under sharia for being promiscuous bisexual whore. But still, nice job Katy

***
Jack was a auto mechanic and he had a little cross roads garage out
in the middle of the desert. One day his friend Omar hurriedly drove
up and in a near panic said, “My camel is sick and won’t get up, can
you help me?”

Jack knew nothing about camels or doctoring, but as a friend said
he would go take a look at the camel. They quickly drove out to Omar’s
place and there in the barn yard laid the camel. Jack got out of Omars
pickup and slowly walked around the camel three times. He finally
stopped and kicked the camel hard in the gut.

The camel let a big fart and got to his feet.