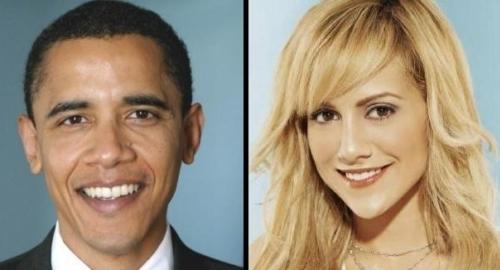 In a bold move that all major news outlets are describing as “well-timed”, “brilliant”, and “sexy” (except for Fox News which only characterized it as “mildly genius”) President Obama called an emergency press conference out on the White House lawn to lament the death of actress Brittany Murphy, and put her untimely demise squarely on our “broken health care system”. President Obama said,

From Billy Mayes to Michael Jackson we as a nation have lost a great number of national treasures this year. Now with the passing of Brittany Murphy, I’m saying enough. The time for debate is over we must act on health care reform now… I’m here today to tell you that all these celebrity deaths could have been avoided if we had affordable health care for all Americans.

Republicans opponents counter that the President was once again being disingenuous. Sen. Al Hartford from Iowa released this statement,

For the President to say that all the celebrity deaths could have been avoided with health care reform is a gross exaggeration. I’d like to know how David Carradine would still be alive today considering he killed himself performing autoerotic asphyxiation in Thailand. Even with a single payer or public option I just don’t see how that is possible.

Under the President’s plan Mr Carradine would never have had to travel to Thailand in the first place. He would have been able to afford for a trained nurse to choke and beat him off. Provided that he filled out the necessary paperwork and got approval from a health review board of course.

The debate over health care continues to rage in Washington, while our nation’s most precious resource, celebrities, drop like flies. Let us hope that something gets done soon before we have no celebrities left.