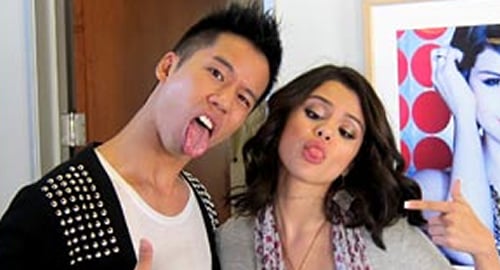 Despite living her life under a media microscope, it seems Selena Gomez can’t help but let her hurtful, bigoted attitude shine through. While stopping to pose for a picture with a fan, Selena belittled the man’s Asian heritage by contorting her eyes in a “squinting” pose. She might as well have asked him if he had any chop sticks, or maybe if he could help her with math.

As if that wasn’t bad enough, she went on to mock his disabilities. Like most of Selena’s fans, the person in this picture is clearly suffering from mental retardation. Sadly, Selena just couldn’t help but stick her tongue out in a mocking pose, as if to say “I hate retards because they drool all over the place.” Why she would want to alienate her core audience is beyond me.

In Saudi Arabia, my 2nd wife (who is also my 2nd cousin) and I had a child together, and unfortunately he was mentally challenged like the man in this picture. Rather than mock and ridicule him like people do in the West, we took extra care to make sure his needs were met. Not only did we let him eat and sleep in the bathtub, but we also kept his hands firmly tied to the ceiling fan to prevent him from unknowing committing the sin of masturbation. He went on to live a rich and productive life until we traded him to Bedouins for a crate of delicious figs. My point is, Selena needs to be a little more understanding when it comes to people with special needs, like Asians.