Taylor Lautner Gets Into A Fight With A Small Girl 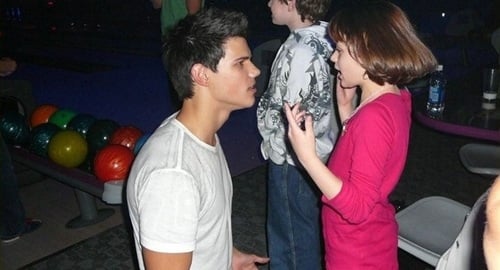 Taylor Lautner, who plays Jacob in the “Twilight” movie series, got into a confrontation with a small girl at a bowling alley in Inglewood yesterday.

According to witnesses, Taylor Lautner showed up at the bowling alley by himself, and proceeded to loiter in the boy’s bathroom for a good 3 hours. He then was making his way to the exit when a small girl shouted, “Team Edward!”

This apparently struck a nerve with Taylor who confronted the small child and asked her “what the f*ck her problem was”. The girl responded with “You’re my problem f**got and I suggest you gets to stepin before I beat your homo wolf a**.”

A source close to the scene reports that Taylor’s eyes welled up with tears, and it appeared as though he was going to slap the girl. However, the girl’s mother intervened and Taylor Lautner was escorted out of the bowling alley by one of the pimply faced teens that work there.