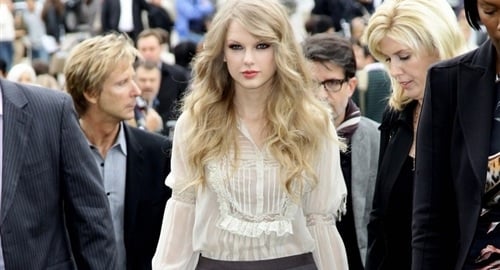 Wow Taylor Swift has just hit a new low by dressing like a filthy pirate hooker.

Pirate hookers are the lowest form of hooker, so it is not surprising that an immoral gutter skank like Taylor Swift would choose to dress like one. What is surprising is that parents let their impressionable teen girls look up to this disgusting harlot.

There is absolutely no excuse for dressing like a pirate hooker. Of course Taylor Swift’s PR team is claiming that she only wore that shirt as a favor to her friend “Cosmo Kramer” because he is dating the designer who is a low talker and she did not understand what she was agreeing to. Yeah I’d like to believe that one Taylor.

As the pictures below clearly show, Taylor Swift is a filthy pirate hooker, and she has proven once again that she is a horrible role model for children.