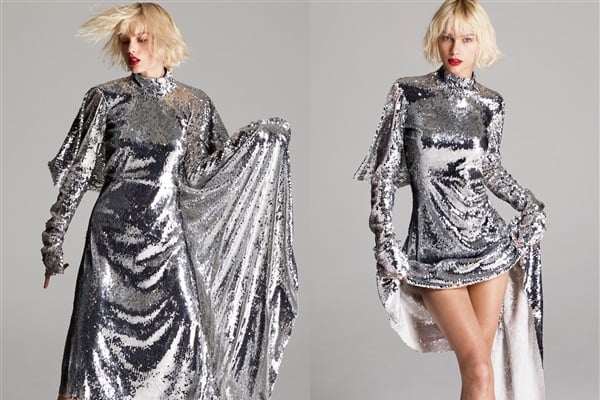 Taylor Swift has finally gone too far! Just look at how she mocks Islam by wearing a glittery silver burka, before lifting it up to expose her sinful bare feminine flesh in the photos below from the new issue of Vogue magazine.

How dare Taylor defile the good name of the holy burka like this! The Qur’an is very clear that the purpose of the burka is repress blasphemous female sexual expression, not to serve as a prop to aid it. Clearly Taylor is ridiculing our rich and vibrant culture in these photos. Well Taylor better prepare herself for the righteous wrath that is going to be brought down upon her stupid He-Man haircut head.

Yes as we speak powerful Imams all over the Islamic world are furiously scribbling strongly worded fatwas to denounce Taylor Swift for this contemptible display. Of course a severe tongue lashing isn’t sufficient for such sacrilegious sluttery, so it has been decreed that Taylor has been banned for life from performing in Yemen, Saudi Arabia, Iran, Iraq, Afghanistan, and the ISIS controlled parts of Syria. This will no doubt be a devastating blow to Taylor Swift’s future world tour plans.