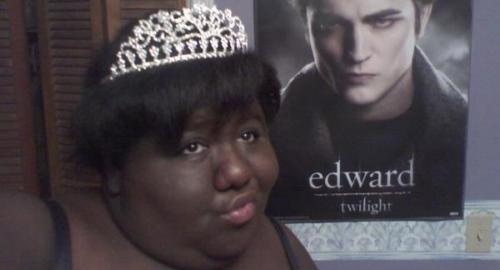 Team Edward was dealt a tremendous blow today as starting left tackle Laquisha Adams had to be helped off the practice field with what looked like a groin injury.

The offensive line was performing blocking drills when Laquisha fell to the ground riving in pain and clutching her “special spot”. Team doctors don’t know the extent of the injury yet because they are waiting on a special piece of equipment needed to examine a crotchal region of this size to be flown in from Denver.

With Laquisha Adams out Vegas odds have overwhelmingly swung in Team Jacobs favor. As one analyst put it “You just can’t replace a Laquisha Adams. Left tackle is one of the most important positions on any team that supports a fictional character, because it blocks the quarterbacks blind side.”

Team Edward were looking at signing NFL left tackle Michael Oher to come in and replace Laquisha, but Michael was quick to squash any hope of Team Edward signing him by releasing this statement,

“Why the f*ck would I come play for them? My movie “Blind Side” is the #1 movie in the country right now. Suck on that Twihards!”